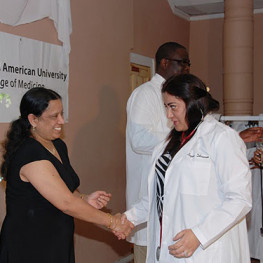 Smartly attired with their white coats and stethoscope, reciting the Student Oath, 43 medical students were formally enrolled into the medical profession at International American University College of Medicine during it's 16th White Coat ceremony. The ceremony was held at Kimatrai Hotel in Vieux Fort, St. Lucia on Friday, January

Smartly attired with their white coats and stethoscope, reciting the Student Oath, 43 medical students were formally enrolled into the medical profession at International American University College of Medicine during it’s 16th White Coat ceremony. The ceremony was held at Kimatrai Hotel in Vieux Fort, St. Lucia on Friday, January 7, 2011.

The ceremony was attended by a number of prominent citizens in the community and government officials including the Minister of Social Transformation, Public Service, Human Resource Development and Youth and Sport, Hon. Leonard Montoute and St. Lucia’s High Commissioner to the UK, Eldridge Stephens.

The various speakers wished the students well in their studies and outlined what is expected of them as medical students. They also spoke volumes of the school during the momentous occasion.

In his welcome remarks, Dean of Basic Sciences, Dr. Jayant Mohite described the event as a landmark one in the professional journey of the students. He urged them to work hard and focus on the task ahead in order to complete the journey. Dr. Mohite described IAU as the right place for the students to pursue their dreams of becoming medical practitioners, adding that they will be provided with the right tools to succeed in a constantly changing health environment.

In an inspiring address which was punctuated with wit and humor, Stephens emphasized the importance of the white coat, indicating that it portrays dignity, respect, humility and nobility. He said that he hopes that after the students have completed their studies overseas they will return to the island to give their service to the community.

Minister Montoute promised the school that the government will embrace its effort in providing world-class education to medical students and other activities related to the development of the community. Montoute urged the students to work hard to achieve their goals, adding that their hard work will lead to success. He said that although their task may be difficult, it is achievable and they should not give up. The minister also congratulated the school for the role it has played in the economic development of the community.

Dean of Clinical Sciences, Dr. Lakshmi Dodda told the students that bestowed upon them is the responsibility of taking care of the ill and they should embrace this responsibility and make it their passion. She told the students that the next few years of their life are the most precious years for them and exhorted them to make good use of it. She also urged them to harness their potential and to not leave anything behind.

Remarks were also given by various students of the school who all emphasized the importance of hard work as medical students. They also shared some of their experiences at the school as it relates to their studies for exams.

At the ceremony, Alfand Khan was presented with an awarded for being the top student in Anatomy with a score of 98 percent. His lecturers described him as a very hard worker who kept focus on the task ahead. 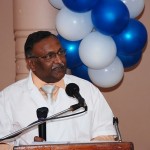 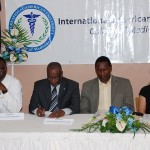 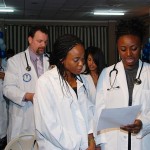 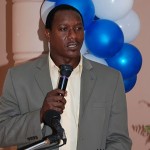