Thinking back to the beginning of my medical journey, I can safely say the struggle was and still is very real.

I came to International American University as a transfer student after my previous medical school was closed. I chose IAU was because on my first visit to campus, I saw how invested Dr. James was in the future of his students.

While touring the campus, I instantly felt a sense of belonging. The family atmosphere was amazing and the professors were very knowledgeable. I had visited another university the day before and was not impressed as I was with IAU. The students I met treated me as if they had known me for years, not as a complete stranger they recently met. That was all I needed. I was hooked on IAU and knew it was the school for me.

Now, for what you want to know, how to adjust to life in St. Lucia.

This was just as tough as getting used to medical school, with all the quizzes, case studies and so many hours of lost sleep. Don’t get me wrong, it’s all worth it. Being so far from your family may be nice for some, but it was my major hurdle for me. After the initial shock and fear subsided, I realized that this was a new culture to experience and new country with warm weather year round to explore. And don’t forget the gorgeous beaches. 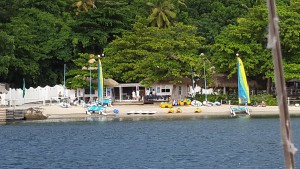 I’ve been living on the island for more than two years, and I can say it gets easier. As the semester goes on, it seems as its time is just flying by. I remember one thing Dr. James said during my first meeting with him, “If medicals school was easy, anyone could do it. If it feels easy, you’re doing something wrong.” I didn’t understand what he meant by this, I was only mid-MD1.

Eventually, I was cooking for myself, studying late and waking up early for the shuttle. At this time, I was elected as class representative for my class. It was a position I had for three consecutive semesters.

I remember my first time in the anatomy lab. I was very excited, only to realize it was a lot more work than I thought. In the words of Dr. Soans, histology professor, “If you don’t have a mini breakdown by mini one you are not working.” No truer words have spoken. If it were not for my good friends and classmates, I would not be where I am now.

While studying is the main reason we are here on the island, I believe there needs to be a balance between having fun and study. As the saying says, “All work and no play,” (you know the rest).

There are so many things to do on the island as an individual or as a group. If you’re looking for some fun, there is the weekly street party in Rodney Bay (I recommend this after mini one i.e. post mini mental breakdown). This was one of my best memories of MD1, as some classmates, and I decided to spend the night in Castries. If you’re feeling stressed (especially when you are waiting for grades) the sulfur springs are fantastic way to help you relax, plus it’s good for your skin. If you don’t feel like traveling, there are several beach restaurants within walking distance of IAU you can visit. It may be tough in the beginning, but it does get easy and it is worth it in the end.

Why I chose to become a doctor